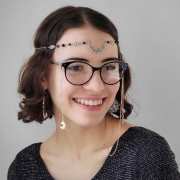 Alexis was born in her downstairs bathroom in Longmont, Colorado. Throughout her childhood it was evident that she struggled in ways that her peers didn’t, largely because of a constellation of social and perceptual difficulties that would later be identified as autism. She is not someone who finds it easy to pander to the idea of success that has been peddled to her just for the sake of it. She doesn’t fit within the typical path that has been laid out for generations of students navigating the world into adulthood. However, even if she may be unable to fulfill that particular idea of success, it does not mean that success as a whole is blocked off for her.

She attended Montessori schools for most of her education and a Sudbury school in her secondary education. Both are educational systems centered around autonomy. Throughout her upbringing she was taught how to be self-directed and self-controlled, and she thrived in those environments. In early adolescence she began to struggle with mental and physical health issues that impacted her life and capacity. She has taken up a variety of regular habits to help cope with this, such as her planner.

She always found herself centered within queer communities and friend groups which has shifted her understanding of the world and personal focus. Gender is something that she feels unidentified with as a concept even when using gendered pronouns like “she” within this bio, which has always been somewhat alienating regardless of whether it’s from queer communities or straight cis individuals. Nonetheless, participation in queer communities is central to how she orients herself in the world, and she wouldn’t change it if given the choice.