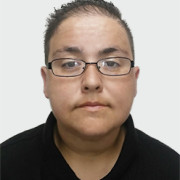 Angel L. Medina was born in Circleville, Ohio, but grew up in a low-income household that moved often. She was raised by two Deaf parents who worked hard as a team to raise her and two brothers and showed them that there are no excuses in life, being dedicated to hard work regardless of disabilities. Angel’s father grew up deaf in Mexico, only having a limited education up to 4th grade. Her mother grew up in an oralist school setting of audism at the Ohio State School for the Deaf. They both will forever be her motivation to achieve more than they ever had in life. Angel will be the first in her family to graduate from college and plans to pursue an advanced degree.

Angel has been out since she was nine years old and has volunteered at numerous LGBTQ organizations, including The Center OC in Orange County, California, Long Beach Gay & Lesbian Center of Long Beach, California, The AIDS Quilt Project, Long Beach Lesbian & Gay Pride Inc. and the Dyke March Movement West Hollywood. She married her fiancé Asha of four years in 2016. Angel will use her education to help address mental illness as it impacts the Latino, Deaf, and LGBTQ communities.