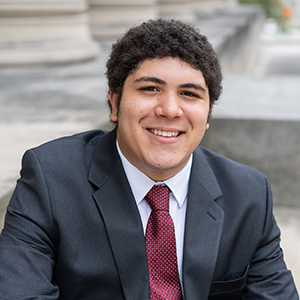 Since a young age, Caio believed that hard work and passion could outweigh any sort of setback imposed upon his way. As a former-ESL student, Caio recalls an 8th-grade teacher telling him that he would not survive going to a regular high school and that within a year he would crawl back to the ESL program. Luckily for him, not only did he survive attending a non-ESL magnet high school but also managed to graduate as the valedictorian of the Class of 2020. During his high school years, Caio engaged in advocacy work supporting fellow students of color as well as other minorities in his school. As a student envoy, he ensured his school would begin to celebrate the Day of Silence, an initiative sponsored by the GLSEN to spread awareness of bullying and harassment of LGBTQ students. He also served as a student representative in the Pittsburgh Public Schools Student Advisory Council, in which he was part of a sub-committee dedicated to spreading awareness of multiculturality in the school district. In college, Caio continues his advocacy work, sitting on the admissions panel of the honors college, as president of the Latino Student Organization, and as lead writer at the newspaper.