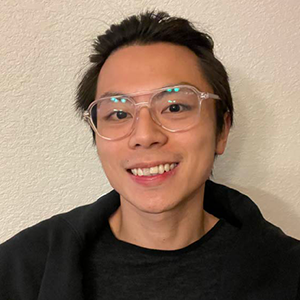 David is a first-generation university student who received his bachelor’s degree (2018) and master of philosophy (2021) degrees in cultural anthropology in the Chinese University of Hong Kong. He received several scholarships to support his studies and overseas exchange programs in the US in 2017 and Korea from 2017-2018. He was awarded six years of funding for his doctoral studies. His previous academic work is closely related to social justice for queer sex workers and racial equality.

During his fieldwork for his master of philosophy thesis, he engaged in advocacy work in a local gay sex worker advocacy group, including organizing a protest against Trump's FOSTA-SESTA bill that threatens the livelihood of sex workers worldwide, hosting a talk to educate local middle-class gay men about queer sex workers, and conducting outreach services for Chinese masseurs and Filipina ladyboys.

His years as a research assistant from 2020-2022 and as a student helper from 2016-2017 focused on South Asian communities in Hong Kong who have historically faced ethnic, economic, and gender inequalities. His recent research assistant work has two major goals: the identity-formation of local Indians and Pakistanis of different class, religious, and cultural backgrounds in a politically volatile Hong Kong, and; the layers of challenges facing working-class Muslim housewives during the COVID-19 pandemic.