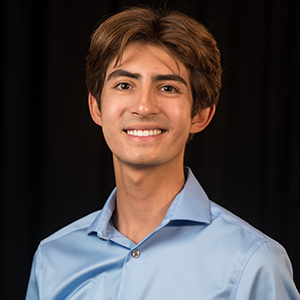 Gabriel (Gabe) Cutter has come a long way since his mother’s family emigrated from Taiwan and started Mount Pleasant’s first Chinese restaurant. Gabe enrolled at Clemson University to pursue a dual degree in computer engineering and economics and will take his skills to a Ph.D. program to make an impact on quantum computing, so he can eventually obtain a role in advising politicians on technological policy. Gabe’s commitment to socioeconomic equity drives his passion for academic achievement. His first organizing project was founding a student-led movement to freeze university tuition, which has saved students tens of millions of dollars. He was also placed in charge of formulating the budget for over 200 student organizations as student body treasurer, managing over $2 million with special attention to equity for smaller and diverse student organizations. During a period of LGBTQ+ hate crimes on campus, Gabe spurred student organization leaders into action to start Clemson’s first Pride march, called Take Back Pride. The movement generated changes to university policy and he has begun work on reforming the Student Code of Conduct. Since then, Gabe has developed a robust student government plan to ensure Take Back Pride’s continuity as an annual event after he graduates.