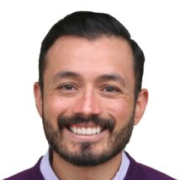 Karin is a proud Latino, first-generation college student and immigrant, native Spanish-speaker, and gay-identified man. Born and raised for the first seven years of his life in rural Mexico, he became a naturalized U.S. Citizen in 2015. Adversity has led Karin to earn his badge of honor as a “non-traditional” student. Kicked out of his family home at 18 years old as a gay teenager, he had to serve as his own emotional and financial support system. His hopes of pursuing university studies were dashed by the need to seek full-time employment to cover necessary living expenses.

Karin is now in a beautiful and loving relationship with his husband. His world has changed quite significantly since the first years of his adulthood. In 2017, after much thought and careful consideration, Karin returned to school to pursue his passion of serving the healthcare needs of Latinx communities. Excelling in his studies and carving out a space for himself in the Puget Sound health community, he is resoundingly excited to pursue a degree in Nursing with the same sense of dedication, determination, and focus he has always maintained. Focusing on issues of intersectionality and the increased challenges facing particular LGBT communities, Karin has chosen to engage with organizations that focus their efforts on serving LGBT-identifying people of color, immigrant and lower-income populations. As a nurse, drawing from his own lived experience and academic and professional training, Karin looks forward to serving the medical and social support needs of these communities.