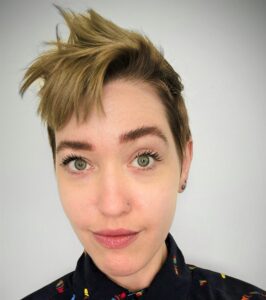 MK grew up in a working-class family in the most conservative county in the Florida Panhandle, and they now reside in Los Angeles. After leaving home at 17, they focused on mutual aid activism for the unhoused while writing creatively and pursuing an English degree. A few years later, latent injuries from a car accident made them become passionate about physical therapy as a way to directly help others.

A survivor of queerphobic domestic violence following a divorce, MK has re-focused their activism to helping those in similar situations gain access to resources to protect themselves and heal from the damaging effects of intimate partner violence – especially those facing oppression for their LGBTQ+ identity. MK continued to volunteer with groups like the National Lawyer’s Guild, Code Pink, and Black Lives Matter in pursuit of justice for victims of state violence.

Chosen family has been instrumental in MK’s path to return to college in pursuit of a career in physical therapy. They hope to use their knowledge of the medical field, background as a communicator, and understanding of social structures to help patients build trust as they recover. After graduating and becoming licensed, they plan to work as a physical therapist assistant then possibly pursue a Doctor of Physical Therapy (DPT) program.

When not studying or writing about social justice issues, MK enjoys dancing, kickboxing, and seeing live music. They hope to record an audio version of their 2020 chapbook ‘feral’, which deals with their brief time living on the road from 2017-2019, later this year.