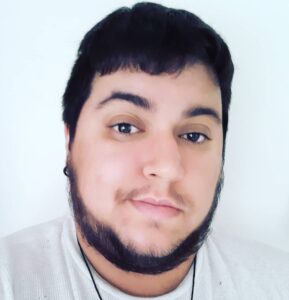 Nicholas was born in Brooklyn, New York, but spent most of his adolescence in Northern Virginia until he graduated high school in 2009. Nicholas knew he was queer in middle school, but he didn’t have words to describe his identity. As he continued school, he became involved in his high school’s GSA and Drama Club, where it was safe to explore sexuality and gender identity.

After graduation, Nicholas moved around to several states to find himself and his identity, only to keep falling short. One day in 2012, he realized he was trans. Determined and scared, Nicholas told his parents and they rejected him. Their rejection was what prompted him to move to Washington, D.C., where he lives today. Nicholas was able to thrive and grow in D.C., and with the continuous support of his community, he was able to welcome his new gender identity into his life with open arms.

He is a proud two-spirit, non-binary trans man. Nicholas contributes to his community as a drag performer, an illustrator, and an advocate for trans rights. He will be attending Northern Virginia Community College and will major in graphic design with a focus in illustration. Nicholas is a 30-year-old non-binary trans man and uses He/Him pronouns.