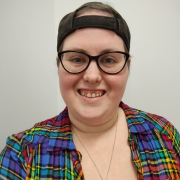 Rose Allen is a queer woman who is taking her second chance at both college and life to bloom where she has been planted. In 2019, after spending years taking care of her great-grandmother as a live-in caregiver, she moved to Flint, Michigan, made a transition into television broadcasting, and began to see where her career goals could take her. Working in that setting through the COVID-19 pandemic, she gained the Future for Frontliners grant from the state of Michigan, which allowed her the possibility of attending college and furthering her career goals. An older non-traditional student now, Rose had already previously started college originally following her high school graduation in 2007, attending college in an attempt to gain a degree in Residential Construction following volunteer work she loved doing to help to people salvage memories and possessions from their homes and rebuild in both New Orleans, and Biloxi, Mississippi after Hurricane Katrina. That college experience was cut short by the onset of the housing market crash in 2008. Fast-forwarding to 2020, Rose went through a cancer scare in the middle of a global pandemic that made her re-evaluate her life and determine the only way to live it was as authentically as possible. Following this scare, she officially came out to her friends, relatives and coworkers and began living her truth in earnest. She is now attending college for an associates degree in arts with a focus on English and media broadcasting, furthering her growth within her profession. In 2022, Rose is coming up on one year since the surgery that has now lead to a clean bill of health. She looks forward to seeing how putting down roots and allowing herself to grow will impact her future positively.