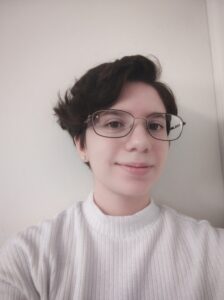 Selena Rodriguez grew up in a fairly liberal household in Wisconsin for 11 years, until they moved to Kentucky. Throughout her childhood her parents were abusive towards each other, and her mother eventually became abusive towards Selena during her teen years. In 2017 she came out to her mother as bisexual, only to receive a less than welcoming response. On the night of her high school graduation, her mother kicked her out and she moved in with one of her older brothers.

During school, Selena was in choir and eventually became a member of the advanced Acapella choir. Selena also volunteered at New Beginnings Therapeutic Riding where she helped other kids and young adults with disabilities. Selena hopes to transfer to an art school in 2023 and finish her bachelor’s degree.

After college she wants to work at Sony as a character designer or storyboard artist, or at Marvel as a writer/character designer. Selena hopes to inspire other autistic LGBTQ+ young adults and show them that no matter what challenges they encounter, they can be successful.