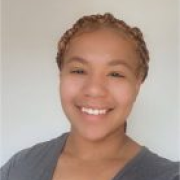 Growing up in a religious home with immigrant parents, Starlet learned quickly that she needed to be careful with who she was even before she realized she was queer. As soon as Starlet realized they were queer, they integrated into the LGBTQ community as much as she could and joined anti-bullying and pro-diversity campaigns. In this journey, Starlet held forums with more than 200 people and learned why prejudice and hate happen and how socialization changes the way people interact with the world. This sparked her to start conversations, especially in college which is how she found the Point Foundation via her professor. Despite the abuse they faced, Starlet learned to believe they could make a difference their English professor believed in them. Once she learned about the Point Foundation, she promised herself she would push to be a part of it and anything like it because she knew Point was what would make her dreams and thousands of others’ dreams possible. Starlet finished her Associate Degree in Psychology and Administration of Justice and is currently in nursing school. Her goal is to address the healthcare disparities in the LGBTQ community and be a part of making safe spaces that provide comfort and promote growth, development, wellness, and a better chance so the LGBTQ community can beat the statistics.