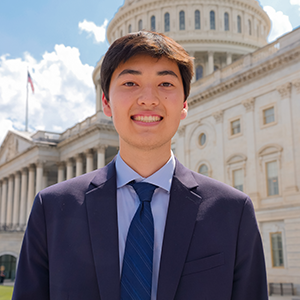 Thai Loyd is a sophomore at Loyola University Chicago double majoring in psychology and political science. Born and raised in Bloomington, Minnesota, he is a second-generation Thai-American interested in political psychology and hoping to pursue a career in public service. His passion for intersectional advocacy began with a 2021 internship for the Asian American Organizing Project, where he researched how Asian Minnesotans view public safety. This summer, Thai interned with OCA-Asian Pacific American Advocates in Washington, D.C., and met with congressional offices to advocate for policies including the Teach Asian Pacific American History Act. Through the program, he worked as the Government Affairs Intern at the Human Rights Campaign, America’s largest LGBTQ civil rights organization.

Thai is involved with the Xin Sheng Project, an organization combatting misinformation in the Chinese diaspora on WeChat, and is a Finance Manager at the international nonprofit Dear Asian Youth. Currently, he is interning at the U.S. Department of State, working with Diplomatic Security’s DEIA Council to implement diversity, equity, and inclusion initiatives. On campus, Thai is a student representative on the Loyola University Public Engagement Working Group and is organizing Loyola’s get-out-the-vote campaign.