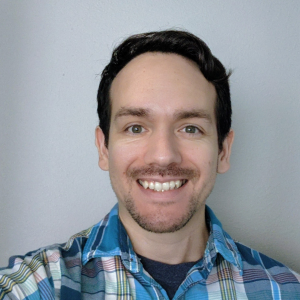 Raised in San Antonio, Texas by a single mother, Vincent Martinez began his college career as a first-generation college student. He is currently pursuing a career as a software engineer.

With the help of his background in philosophy, Vince hopes to create software that promotes and inspires people to realize their vision. He believes everyone has a vision of the world that is better than the world as it is now. The software he designs will aid ambitious people to act toward that vision.

As a demi-bisexual, Vince grew up without understanding himself and his sexuality. He felt that everyone’s experiences never seemed to fit his experiences. Without an example in the community, he struggled to discover his identity. Over time, Vince learned to silence the voices that criticized him for subverting expectations and learned to listen to his own inner values. This lesson has influenced how he interacts with others—with the utmost respect for their values.

Vince is truly an educator at heart. He has worked as a TRIO professional for over seven years—helping first-generation, low-income high school students prepare for college success. His aim in life is intimately tied to helping people reach the potential for the life they choose. He understands the importance of people’s need to know themselves and the values they hope to realize in the world.