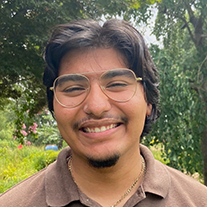 Xavier was born in Los Angeles, California but moved to Raleigh, North Carolina when he was two. Growing up first-generation to two Mexican immigrants and as the oldest sibling to a brother and sister, Xavier has defied many firsts in his lifetime. Struggling to accept his queerness surrounded by an unsupportive Catholic community, Xavier decided to assert his pride through coming out to his friends and teachers in sophomore year of high school. After coming out to his family in junior year and facing total rejection, Xavier channeled his dejection and anger into serving as the Student Body Treasurer and the President of his school’s Gender and Sexuality Alliance, where he worked in philanthropic and queer-inclusion efforts. At 18, he moved out of his parents’ house and at 19, he is now a sophomore at Columbia University.

At Columbia University, Xavier found a place in his school’s Chicanx Caucus, where he serves as Gender & Sexuality Chair. Through hosting workshops on queer Chicano/a/x culture, Xavier began to discover his passion for studying queer Chicano art and literature, especially as it relates to his experience growing up in the South versus other Chicanxs who primarily grew up in the Southwest. He is interested in the physical and metaphysical borderlands queer Chicanx storytelling can explore, and how these works are reviewed in the Western canon. Majoring in American Studies and minoring in Computer Science, Xavier is eager to continue to learn about new industries and fields around him like law, economics, tech, and academia. After college, Xavier hopes to carry on with his love for traveling, kayaking, crocheting, and working to support himself and the community around him.