Scroll down to submit your story. 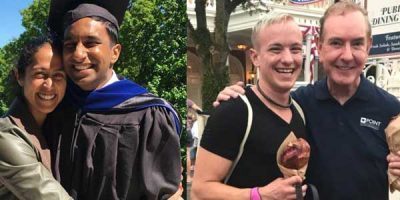 Scroll down to submit your story.

“My coming-out, coming-of-age story throughout the 1960’s was predominately painful, not because of the actual eyes of the world outside, but rather my fearful – and in many ways, misinterpretation – of the perception of what the eyes I did see around me. Fortunately, I found that part of me that can engage will all people and enjoy the skin I’m in. We all can live full lives when we primarily focus on the current moments we have before us and turn down the pressure on the fears of tomorrow and the regrets of yesterday!” – Cliff

“I was so worried with how the world would view me so I sheltered myself in a box. As it got close to my 16th birthday, I told myself going into the new year of your life, you would be who you were meant to be. So the day of my birthday, I made a statement on social media stating that I am a homosexual and I am proud of it. People didn’t like it and they show it to this day, but I didn’t care because here I am at the age 21 living life and loving every minute of it.” – Sam

“It’s truly been a long road to follow through with since the 1960’s, but the distance travelled has been part of the accomplishment in itself. For all those undertaking their own particular life journey as a LGBTQ fellow traveler, be assured you are not alone and trust in your own special gifts and capacity to reach your destination aspired towards BECAUSE YOU ARE NOT WALKING ALONE or unacknowledged!” – John

“Coming out may not be easy, but, in my case, some family members and the friends I made at school and the Unitarian Universalist church I attended, made all the difference. If you are contemplating coming out, I know it is a scary prospect. Please know, however, that there are millions of people “out there” who love you, who will support you, and who will help you to realize your dreams.” – Bruce

“I came out to my parents the day I was born with PAIS and Hypospadias. My parents forced me into the closet and locked the door, and now, after 14 failed Hypospadias repair surgeries I came out as a an intersex woman fighting for the rights of intersex people and I’m an intersex peer Support Specialist.” – Andrea

“When I came out I had anticipated some of the reactions I received from friends and family, others were completely unexpected. One of my friends, who I thought would be most supportive, was not, and struggled with hearing my truth. On the other hand, I thought my brother would reject me, instead he was the most supportive and to this day calls me one of his heroes for being brave, strong, and true to myself.” – Kelly

“I had thought that my father would have trouble with my being gay. One day (I was about 25) I realized that for six months my father had literally been avoiding using pronouns when talking about life: no “he/she,” no “her/him,” and so on… I was touched beyond words to understand that he was telling me – in such an extraordinarily loving and inventively gentle way – that he knew, and that when I was ready to tell him, he was ready to hear whatever I cared to tell him.” – Christopher

“My adopted father outed me to my mother, having seen something posted on MySpace. My mother confronted me at home and said ‘Your father thinks you are confused about your sexuality. Are you?’ I said ‘No. I have never been confused about my sexuality. I have always known who I am.’ Mom said “You know I will always love you, Anthony. It doesn’t matter to me who you love. So long as I have grandbabies.'” – Anthony

“I came out when I was 17 years old in High School to my parents who were ministers. It was hard, and it took time for them to accept it. Coming out, I lost friends, but I gained college friends instead and I gained teachers as compassionate shoulders to lean on.” – Quenton

“In the Fall of 1976 I went away to a college where I began to meet other gay men like myself; where once I felt so alone I was now beginning to feel a part of a group. Knowing that there was a community to turn to, I came out to my mom. She said she had known for a while, told me she loved me, and thanked me for my honesty. She was concerned about my safety in a world that could be hostile, but we took it a step at a time. Eventually I came out to my whole family and over the years their support has been unwavering. It just took that first step.” – Robert

“I’m 30 yrs old and gender queer. I’ve always always had crushes on girls, but I couldn’t express it the way I wanted too when I was younger because of religious beliefs. In 2017, I finally came out the closet to my mother and my family. I felt very great and proud.” – TJ

“Good morning from Africa with a lot of love. My coming out as Trans woman was great. We had a meeting with the health workers and people were happy to see me coming out.” – Delvine

“I technically don’t have a ‘coming out’ story because I was never in. Over the years I have lived my life openly, boldly and proudly, not just for myself but for all those who are unable for so many reasons. I have made it a point to hold space for them until they are able to stand tall for themselves and in turn hold space for someone else. I’ve learned never to judge or pressure anyone to come forward into the light until they are ready and able. The path is not easy and at times it can feel lonely and endless, but support, friendship, love and family are here waiting on the other side. It does get better and we don’t have to conform to be accepted.” – Ochi

“After realizing how beneficial coming out was, I want to help other LGBTQ students receive the same opportunity!” – Tarek

“I grew up in a strict evangelical family – and when my parents discovered that I was gay they turned their backs on me. I felt so alone. But over time I made my own family of choice – and you will too.” – Bruce

“I grew up in a rural area of Alabama in a very evangelical town. Being out was dangerous, to the point that I didn’t know any queer adults until I was in college. It sounds cliche, and it isn’t always easy…but it can get better. There are so many people in the LGBTQ community who want to help. You just have to find them.” – Dawn

“My coming out story took place over 30 years ago in the island of Puerto Rico. When I told my sister, she said she was proud of who I was and would support me no matter what. To hear these words from a 12 year old (a wise 12 year old) made my heart melt. Celebrating who we are and living our fullest life is never easy, but, we have that right, like anyone else.” – Erika

“There’s no wrong or right way to come out, and everybody’s journey is different. Overall, my experience worked out best for me because I was able to tell my story my way.” – Tyler

“I came out in high school because I was tired of other people telling my story for me. I took ownership of my story. The freedom was exhilarating. I celebrate my coming out and embrace all queer aspects of myself for people who might not be able to for themselves yet.” – Tayler

“Be true to yourself and have self respect. Be proud and even be an activist or big old queen if that is who you are. Plus, there are many gay organizations ready to help you. Reach out to them. The support and advice will amaze you.” – Chris

“I grew up in predominantly Southern Baptist circles in Oklahoma and attended a Bible Academy. I knew that if I came out during high school, I would not be able to graduate. However, I knew that some of my fellow classmates would have been overwhelmingly supportive of my decision. I hope to empower other LGBTQ+ youth to find their confidence by connecting and strengthening their bonds with allies and other LGBTQ+ youth.” – Cooper

“It was never one moment but a series of moments. Coming out has been grieving who I thought I was and letting go of my fear of rejection. It has been discovering these beautiful pieces of myself and celebrating how it’s all come together. I came out because it’s the most important thing you can do for yourself and it helps bring visibility to our community. Because we’re here and we’re worthy of love and acceptance.” – Sammie

“Coming out is a lifelong journey that happens when your heart is ready to share your life! It is personal, it is an act of love, and an act of liberation. Be you and be loved!” – Carlos

“I came out 25 years ago on The Geraldo Rivera Show as an out actor & comedian. It gave me the power to become the man I am today. No apologies of who I am, no hiding in fear of not have the career I dreamed of.” – Jason

“In 1990, I was deep in the closet and unhappy. I lost my first post-college job after being outed and humiliated at work. Skip ahead to today. I’ve been with a wonderful man for over 20 years. I’ve built a career in which I am respected. I’m happy and confident. Best of all, I’m ME! Being out isn’t always easy or pretty, but it gets progressively easier and prettier as time passes. In 28 years of being out, I’ve never regretted it.” – Pete

“I spent a long time trying to push down my feelings and change my identity. I felt shamed and heartbroken because I hadn’t been accepted by those who were supposed to love me unconditionally. With time, my wounds healed, and I learned to love myself and honor the part of me that others refused to acknowledge. I surrounded myself with people who supported and understood me and became passionate about helping others who had similar experiences as mine. Though it may be hard in the beginning, it is important to plant love in your heart and not give in to the hate of those around you.” – Fiorella

“I did not have emotional support from my family. I internalized their homophobia and hated myself. It would take a long time for me to get comfortable with myself, learn to integrate gayness with artistry – but in the mean time I spoke out against homophobia a LOT. Later in my career, my husband and I learned to call others on their homophobia, and became much stronger in the process.” – David

Submit your coming out story

Help LGBTQ young people know they are not alone.