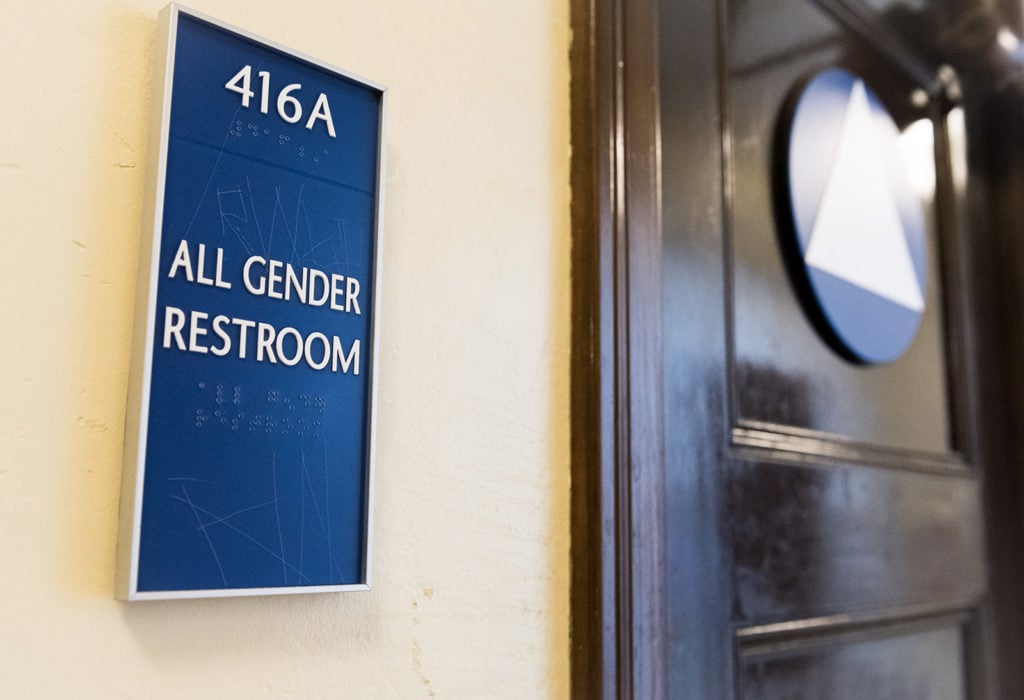 Many trans, nonbinary, and gender nonconforming people often have to weigh the risks that can be associated with using gendered restrooms and taking care of our basic needs if there are no gender neutral alternatives nearby. We must decide if we feel comfortable enough to even choose one gendered option or another, and evaluate if our presentation will make it safe enough to do so. Of course, not all trans people have to make these decisions, but risk associated with using gendered restrooms is a reality that many trans people face daily.

In 2015, University of California campuses received a mandate to change all gendered single stall restrooms to be gender neutral. As a result of this mandate, UCLA released an All-Gender Restroom Map that was originally created by the UCLA LGBT Campus Resource Center (CRC). However, the map was not regularly updated, so in 2017, a group of volunteers began a campus survey of UCLA all-gender restrooms.

Kyla Worrell (they/them) worked with staff at the UCLA LGBT CRC to initiate the process walking all over campus to each restroom and evaluating each based on publicly accessibility, clear indication as gender neutral, and ADA accessibility, as well as whether or not a restroom had other fixtures such as baby changing stations, urinals, or showers.

As interns at the LGBT CRC, Mario Martinez (he/they) and I took over the restroom project in Summer 2018 as a volunteer project. During this process, I updated our spreadsheet with information about which restrooms had been designated as staff and faculty only, and therefore were not accessible to the public. We also found that many restrooms were either impossible to locate or were in fact still gendered. We prioritized being able to indicate which restrooms were publicly accessible to anyone on the campus, and we found that our final count of restrooms was lower than the actual number of all-gender restrooms because so many had restricted access.

As we surveyed many campus buildings, Mario and I sometimes encountered people, usually staff or faculty in a building, who were confused when we introduced ourselves as interns for the UCLA LGBT CRC looking for all-gender restrooms, or who did not know where these restrooms were despite working there.

In Winter 2018, Mario and I completed the surveying of all the restrooms on the list and passed the spreadsheet on to the professional staff and connected with our Graphic Design Intern Elliot Yu (he/him), who began drafting an updated version of the All-Gender Restroom map. He also redesigned the formatting to make it easier to reference the back side of the map, which had building names, room numbers, and information about the accessibility of restrooms.

Of the approximately 250 restrooms on our spreadsheet, we found that 95 were not publicly accessible-35 of which were in the medical building near campus. So we updated our map to reflect those findings. 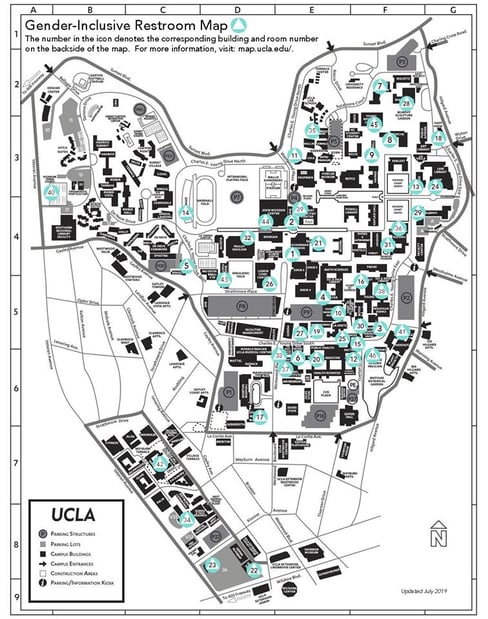 In July 2019, we released the new map on our website, shared it with campus departments, and posted it on social media. This resource is now accessible to over 45,000 students who attend UCLA, as well as staff, faculty, and visitors. It allows for trans, nonbinary, and gender nonconforming people on campus to go about their lives without worrying about finding a restroom they can use safely.

We hope that the next step is the establishment of more multi-stall gender inclusive restrooms on campus, as well as a more permanent updating system that does not rely on volunteer work performed by busy students, spread out over a number of months. In May 2019, I attended and spoke at the UCLA Town Hall to discuss updating Policy 890, which has now been passed with an addendum to make multi-stall all-gender restrooms required for new buildings and a possible renovation for existing buildings.

I’m really grateful for the people who helped lay the groundwork for this project with Kyla, the staff at the UCLA LGBT CRC, and the Facilities Spreadsheet. I learned a lot about organization and planning through the trips Mario and I took, but I also learned about how important this resource is and how much work it takes to create something as important as this map.

I hope that UCLA continues to update the list as new restrooms are established, and that the increase in gender neutral restrooms on campus continues, making campus more accessible to all.

This post was written by Point Scholar Kai Huang.

Kai is Psychobiology student at UCLA, the Outreach Intern for the UCLA LGBT Campus Resource Center, and an Executive Board Member of Transgender UCLA Pride (TransUP). After graduating, Kai will attend medical school and provide accessible healthcare for the trans and intersex community as an endocrinologist. Read more about Kai here. 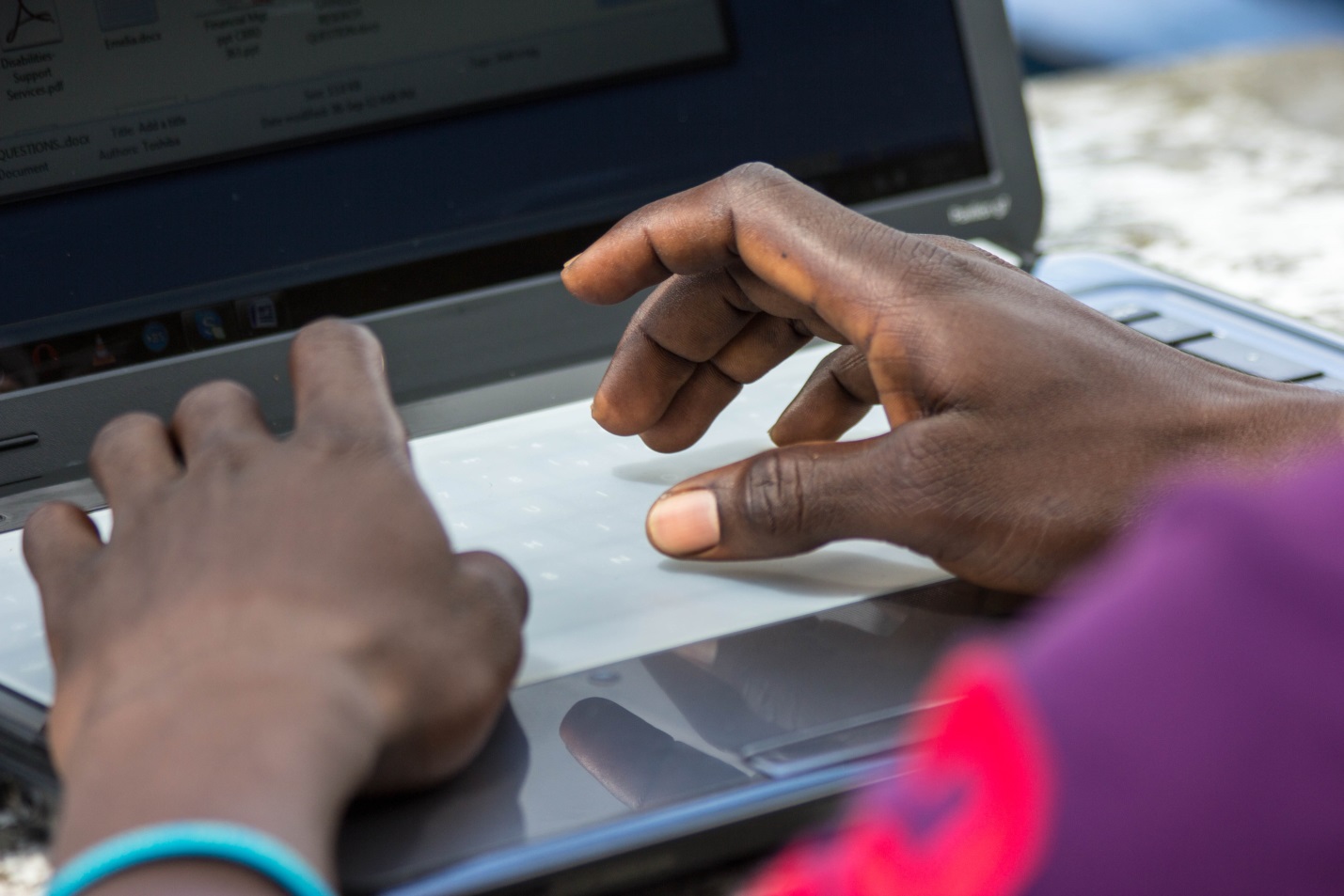 #AskPointScholars Responds to Question: How is your life now that you go to college and live openly?